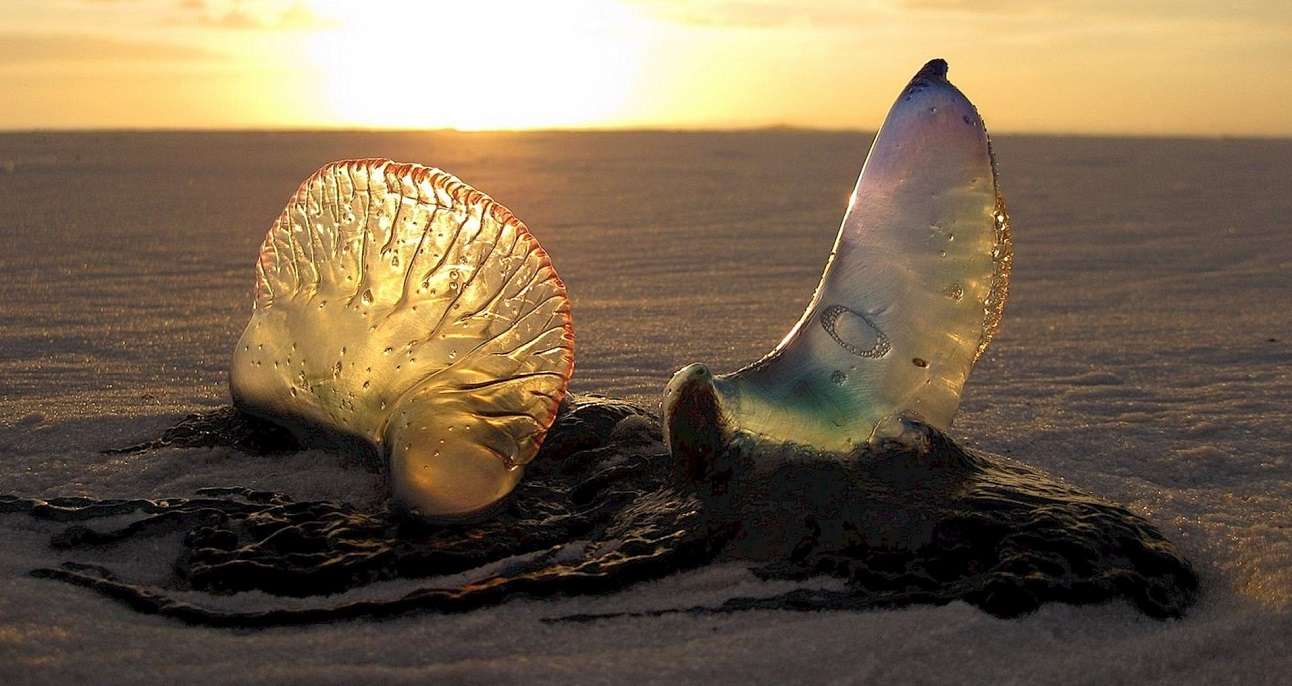 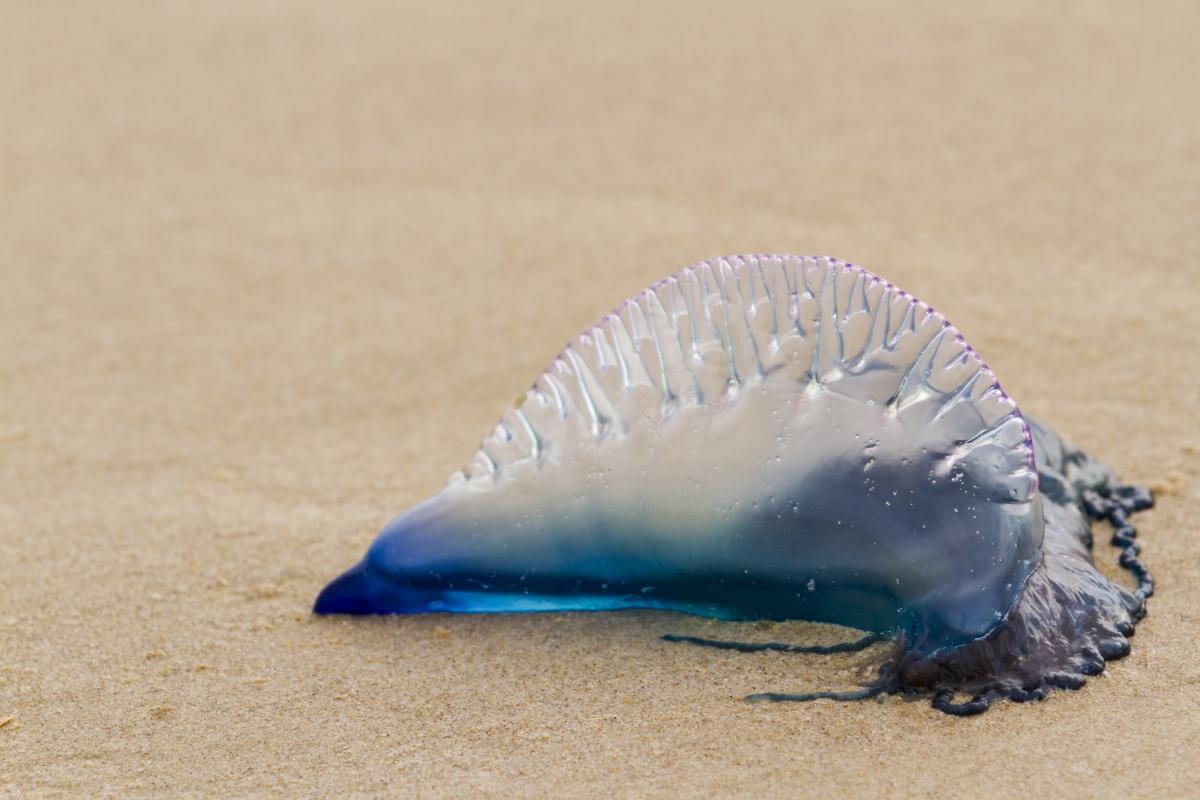 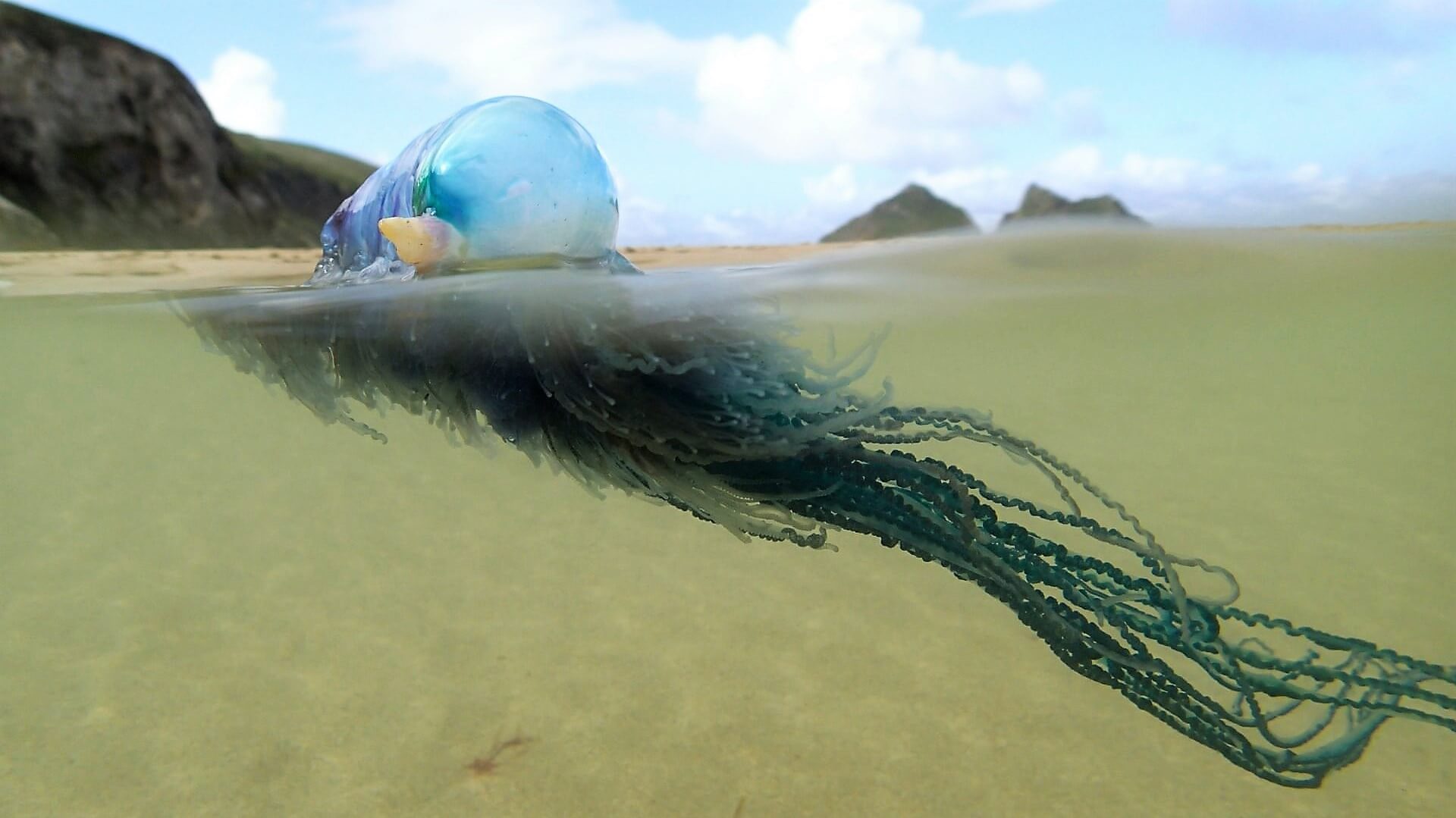 Ken Gerken was in National Geographics film "Deadly Dozen 2 - Central America". To contact Ken about this story, email at: picklejuicetoo@gmail.com

It is Friday the 13th, 2004; I’ll never forget! I was vacationing in Key West, Florida and I came close to finishing my retirement years at age 66! My wife and I had left the Sigsbee Military Campground for the beach. We headed for the Truman Annex Complex at about ‘Mile Marker 1’, adjacent to the Fort Zachary Taylor State Park Beach.

We arrived at the beach at 3 P.M. My wife Susan went off to check emails at the nearby Navy Recreation Center while I set out the chairs and towels. I applied sunscreen and went into the calm, warm 75 degree water and began swimming parallel to the beach. Susan joined me at 4 P.M. She was looking forward to going for a swim. There was a comfortable 15 knot breeze from the South. I suggested we walk to the other end of the beach, on the East side, and swim back . We were floating on our backs, letting the gentle tide carry us, occasionally moving our arms for a little more motion.

We reached the end of the beach where our chairs were, when all of a sudden I felt as if I was being electrocuted. We were about 12-15 feet out from the beach in only 5 feet of water. I quickly looked off my right shoulder and saw a bottle-like jelly fish. It was 8" or 9" in diameter. My back, shoulders, chest and arms were engulfed in the tentacles.

I AM IN EXTREME PAIN !

On 2/13/2004, Ken made contact with a venomous Portuguese man-of-war at Truman Annex Beach in Key West, Florida. He was hospitalized at Stock Island Florida Keys Memorial Hospital for severe stings on his back. This photo was taken six days
later after intial contact. 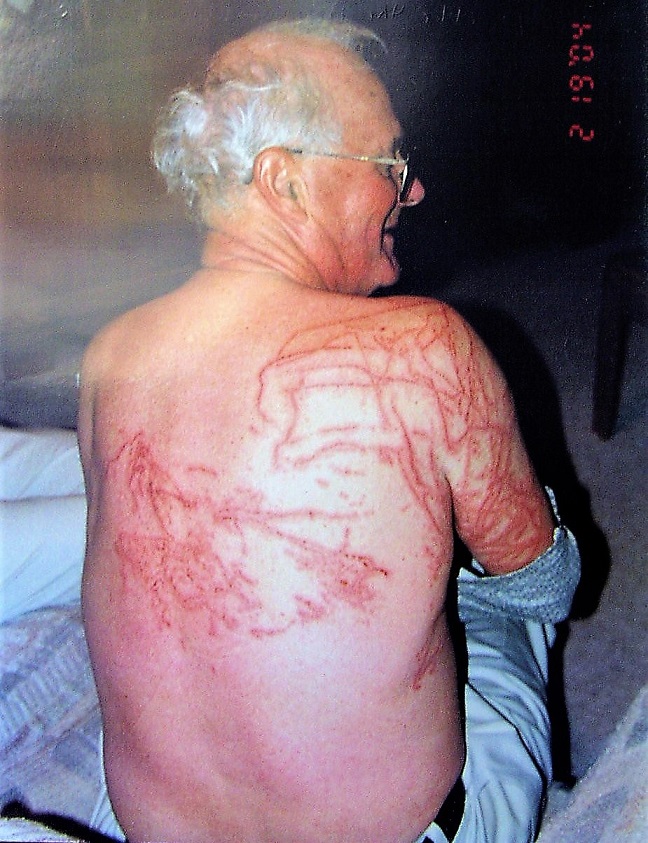 I raced out of the water, pulling off the blue tentacles from my chest and arms, and yelling for help. Susan had no idea what had happened. She did see my black beach shoe floating away, and first thought I’d been attacked by a shark. She didn’t yet realize she too had gotten the tentacles on her arms. Shaking with severe pain, I managed to get to the picnic area where many of the people on the beach came to me. I asked for Benadryl and someone had them. As I was shaking so much, I was fortunate to be able to swallow two capsules. I was also starting to hyperventilate. I knew I had to get to the hospital.

The only available car was packed with gear and not suitable. Someone used their cell phone and called 9-1-1 to send an ambulance. It was the WORST PAIN I experienced in my life. I was shaking; my hands and feet felt as if they were on fire. Randy, a scuba diving instructor, came over to help and tried calming me in order to slow my breathing. But by then the pain was excruciating and I did not think I would stay conscious! I was still hyperventilating, shaking and burning up!

The people from the beach were doing what they could. First they applied towels soaked with vinegar to my lashed back, chest and arms to ease the pain. Then they poured the vinegar all over me, but it didn’t help. They tried bags of ice, putting them on my back, hands and feet. I don’t know if it reduced the pain, but my shaking got worse and after a couple of minutes, they stopped applying the ice. Susan told me I looked very pale and my eyes were blood-shot. She had visions of being widowed a third time.

The ambulance finally arrived and the trip to the hospital seemed to take forever. Finally I was wheeled into the Emergency Room, quickly diagnosed, and put on an I.V. with a strong narcotic. I was told it was stronger than morphine. In about 2 or 3 minutes I felt tremendous relief. My blood pressure came down, my color improved, I could smile at the nurse and my wife. I knew I was going to live! I truly had doubts I’d survive the ordeal. After the I.V. narcotic took effect, the nurse came in with steaming hot towels and applied them to my back and chest. These hot towels felt wonderful!.

The nurse in the emergency room thought I might have some permanent scarring. Thankfully, the welts on my back, chest and arms have been helped by a vitamin E cream. She also said it was one of the worst cases of Man of War stings she’d ever seen. If you are ever a victim, consider even the slightest breathing difficulty or altered level of consciousness a ‘medical emergency’. Call for help and use an automatic epinephrian injector if available, or at the very least, benadryl.
Many people see Friday the 13th as a ‘bad luck day’, but I’m happy I’ll be around to celebrate a few more!